BTW Solicitors In The News

After a diagnosis of MS, Mike was reassured given he had a Critical Illness policy with Scottish Widows.

He made a claim but unfortunately the claim was rejected. The claim was rejected because Scottish Widows considered Mike had not disclosed a minor eye problem he had consulted his GP about many years before taking out the policy. They insurance company considered this information would have alerted them to the possibility of MS and they would not have offered insurance.

Mike contacted us. We initially contacted Scottish Widows who were not prepared to change their decision.

We complained to an adjudicator, who considered our arguments but rejected our complaint.

Scottish Widows were not prepared to accept this decision so the matter was reviewed by an ombudsman who upheld our complaint. The claim was paid in full with 8% interest and compensation. 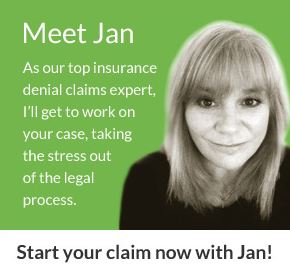 Jan is a leading insurance denial claims specialist. She represents injured, disabled and bereaved families with compassion and sensitivity. With extensive experience in handling these matters, she has now become one of the UK's leading solicitors dealing with critical illness denial and life insurance claims.

Having gained front line experience in representing clients who've had claims on their critical illness or life insurance refused, Jan first became involved in this area when her own partner was diagnosed with terminal cancer and his critical Illness claim was denied. Despite difficult personal circumstances, she fought the decision of her insurers and the claim was won in record time. Jan has passion for representing others in the same position. She has now assisted a large number of clients who have had their claims denied with great success.

View all posts by: BTW